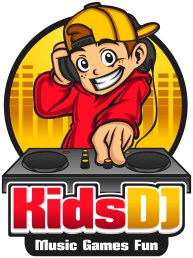 Imagine your child and their friends having the best party ever, not just another kids party but an event with a difference; full of endless interactive fun, kids party games, great music, cool lights and imagination. This is the dream that we bring to life, with our brilliant kids disco parties for children aged 4-13 years. We cater for kids birthday parties, teenage discos, christenings, holy communions, school discos, kids clubs, house parties and other children’s party events. Entertaining kids is a specialty and that’s why it’s important to make the right choice when booking your kids party or family function.
Music, fun and games for all the family, catering for all age groups. Your children’s DJ will keep everyone entertained with lots of interactive party fun! 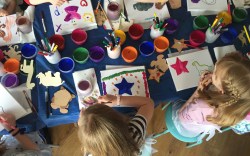 At Kidz Kreationz we can offer a party with a difference, where you can enjoy, a relaxed and stress free party, while the kids have fun creating.
There’s a great choice of craft activities to suit both boys & girls from ages 4 years and upwards.
We can even create a party based on popular themes such as “FROZEN” across a selection of our craft activities such as canvas bags, back packs, t-shirts, canvases and many more.
Contact us to discuss your party ideas and we will do our best to meet your requirements to make your party a special one!
We can also host the party at Darby’s Coffee & Arts Lounge in Urmston, Verace Kitchen in Sale, your home or at your chosen venue.
We also run craft activities at parties, small groups, family events,

Amazing Stephen is an award-winning Children’s Entertainer and Magician from Stockport, Near Manchester.

He performs magic and puppet shows, party games, teaching workshops, circus skills and other activities for your party, fun-day or event. He can perform walk-around close-up magic, a full one-hour show, two-hour party dancing games package or magic workshops where he teaches tricks to the children.

He is the 2010 Close-Up Magician of the Year and 2008 & 2009 Cabaret Magician of the Year. He has written 17 books, produced 20 DVDs and was on Britain’s Got Talent in 2009. An ex-teacher, he now performs professionally as a full-time children’s entertainer. 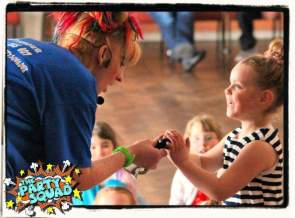 Based in Runcorn, Halton Ditzy Doodles present her parties and events for children across Cheshire & Merseyside.

Ditzy Doodles loves to party and has the perfect recipe of fun and giggles to create happy memories for your child’s special day, whether that be a Christening, Birthday or any other special occasion!

The Party Squad is also available for corporate events offering bespoke, themed and seasonal services for your family events.

Please note: we do not offer unlicensed mascot visits! 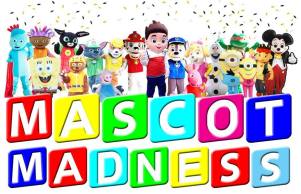 Welcome to Mascot Madness Where the fun can be brought to your home, party or event. Bring the magic to life with our range of characters mascots.
Also available full party packages,including disco,lights,magic and much much more,all members of our team have a current DBS check and experience working with children in previous roles.

As seen on CBBC!
Froggle Parties offers the very best in children’s entertainment. Our parties are jam packed with heaps of fun and varied activities that the kids will absolutely love.
Our wacky entertainers are the craziest and best in the business, and all trained to do our own hugely popular Froggle shows to ensure quality is consistent across the whole team.
With a huge number of party packages to choose from, we have something for everyone, for any age and every occasion.
For more information, get in touch by email or phone to find out more.